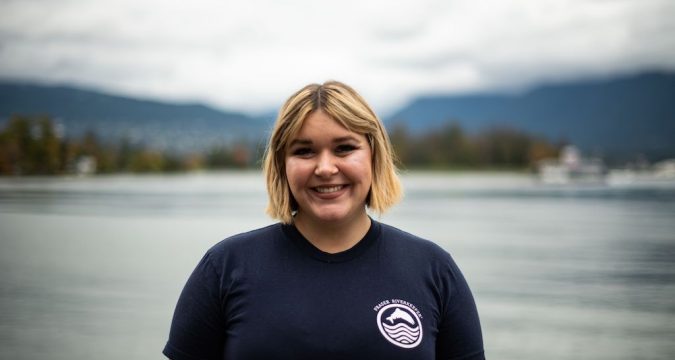 For this Swim Guide Spotlight, we reached out to Sadie Caron of Fraser Riverkeeper, to hear in her own words how it feels to become a waterkeeper.

*This interview has been edited for length and clarity.

Or: Thank you so much for taking the time to meet with me. Could you please introduce yourself and tell us about your relationship with water and how you go to your current role as the Fraser River Riverkeeper?

Sadie: Sure! I am Sadie Caron and I am the Program Manager for Swim Drink Fish Vancouver and the Fraser Riverkeeper office of Swim Drink Fish. I am originally from Calgary, Alberta. I’ve lived in many different places across Canada. I went to school on Vancouver Island, I used to go to summer camp in Ontario on Eagle Lake, I used to live in Montreal, and I also lived in Edmonton. That is where I first joined Swim Drink Fish.

In 2018, I was the Outreach Coordinator for the North Saskatchewan Riverkeeper and in 2019, I joined the Fraser Riverkeeper team as the Program Manager. I absolutely love Vancouver life. I actually got to go skiing and swimming in one day… that is the absolute dream!

Or: You recently received the title of a Riverkeeper. Congratulations! How do you feel about carrying this title?

Sadie: That is kind of a funny story. When I started in the North Saskatchewan Riverkeeper, I was the only employee. I saw that in past correspondence, the last person who worked there was referred to as the Riverkeeper. So I just naturally assumed that that is me now and I started referring to myself as the Riverkeeper (laughs). I just gave myself the title. When I started working at Fraser Riverkeeper, Lauren Brown Hornor unofficially held the title. The last person who was officially called the Riverkeeper was Doug Chapman. He was an incredible lawyer and advocate for the water. Following in the footsteps of someone who has done so much work to protect the Fraser River really sets a precedent for our organization. It is a huge honour to me to be bestowed with this title.

Or: So you were using it a bit prematurely but you did earn it at the end! Was this something you always wanted to do?

Sadie: I was always really connected to animals and the water. I have so many memories of my grandparents’ place in Quebec called Lac-des-Sables. This is where my sister and I would swim every day. I always tried to do every water activity I could. I grew up doing synchronized swimming. In summer camp, I learned how to canoe, kayak, and sail. When I was in university, I really wanted to travel. My university had a campus in Barbados, so I went there for a semester. I took as many water-related classes as I could. In the morning, I would go to the water and go surfing or swimming and in classes we would test the water. This is where I collected my first water sample. It made a huge impact on me, to have such a wonderful time with the water, and then seeing how the water itself is doing. I wanted to bring it all back with me, home, to Canada.

Or: Let’s talk about your work and your watershed. What is the first thing that comes to mind when you think of the Fraser River?

Sadie: I live in New Westminster, which is right on the river. There is this little walkway that is called the quay. Walking there with my friends or my sister as a way to keep my mental health in check became one of my escapes during the pandemic. It is really beneficial for me to see the river. In this part of the river, the water is very murky and there are a lot of logs floating down. This is a bit of an ongoing joke about me, that every time I see a log in the water I think I see a seal. But one time it was actually a seal! It was so much fun to see it swimming and splashing around. There is so much life you can see on the Fraser.

Or: The Fraser River is very long and connects many bodies of water. What would you say is your neck of the woods? What part are you most involved with?

Sadie: A lot of what we are focused on is in Vancouver. Even though we are called the Fraser Riverkeeper, much of our work is actually in False Creek. This is primarily because it is considered one of the most polluted waterways in British Columbia. We definitely see that through the work of our monitoring hub. We see high counts of E. coli and a high amount of plastic debris. To combat this, and to learn more about what is in our water, we installed seabins to vacuum up debris from the water.

False Creek connects to the larger water body of the Burrard Inlet which goes up north of Vancouver. It connects the city of Vancouver with West and North Vancouver all the way along Burnaby and Port Moody. That in turn opens into the Strait of Georgia which also connects to the Fraser River on the south of Metro Vancouver. That is about 21 different municipalities.

Sadie: (laughs) Looking at a watershed and all it connects to really reminds me of veins in the human body. Everything is so interconnected. Something that happens thousands of miles away can really impact your life.

Or: What is important to you to let people know about this body of water?

Sadie: What I would like people to think about when they think of the water, any body of water, is that we are not disconnected from it. Every time you turn on a tap the water comes from somewhere and every time you flush the toilet the water goes somewhere. Our connection with water does not start and end at us spending time by the water. It’s a connection we have every single day, so enough people who are really concerned about water changing those every day actions can be really impactful.

Or: What could people do to better their relationship with water?

Sadie: You can always conserve water. Little things like don’t leave your water running, let the rain water your lawn, or let it go brown from time to time. I also think we should rethink our toilet systems. I think that it’s funny that we have these amazing fresh waters and we use them to flush our toilets. There are a lot of new composting toilets or toilets which are designed to conserve water. We can make a big difference by rethinking the ways we use up water. Above all, you can advocate to separate our sewer systems. The sewer system in Vancouver is a mixed system, meaning it carries domestic sewage and storm water in the same pipes. This results in untreated sewer ending up in our waterways.

Or: What would you say is your watershed’s secret?

Sadie: I don’t know if this is really a secret, but we are a part of a group called the Fraser Valley Illegal Dumping Alliance. This is a wonderful coalition of concerned citizens, nonprofits, and government, all working against illegal dumping. In one of the cleanups I learned that along the rocky shores, just before the new snowmelt comes in, Sturgeons come to lay their eggs. Recently, a Sturgeon was found that was estimated to be 150 years old. Just think of all the human history that fish lived through. I love thinking that under those murky waters, exactly where you can’t see, could be one of these living fossils. Just swimming through.

Sadie: I have always been a big advocate for activities and opportunities. I really encourage people to try out new things related to their water. That is the best way to build your relationship with the water.