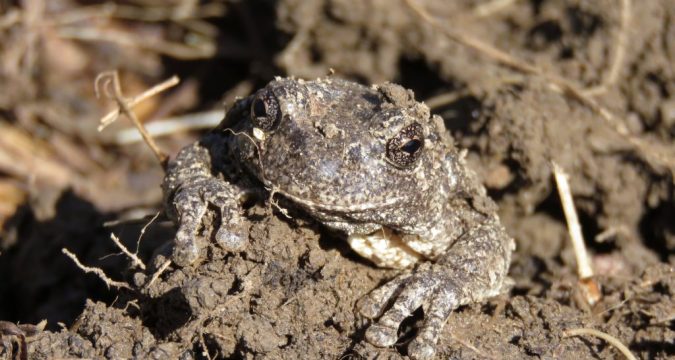 For many centuries people thought frogs grew out of the mud. Literally. Until just a few hundred years ago, the belief was that frogs died when the cold weather came, and in the spring, mud spontaneously turned itself into frogs. There was no such thing as a frog reproduction – It seemed implausible that frogs could survive the winter.

As far as folks could see in those days, frogs disappeared in the winter and then popped out of the mud when spring came. So the frogs themselves must be made of mud. It was the clearest and most logical answer to why frogs came out of the mud every year. Eventually, we figured out you can’t make a frog out of the mud and that there’s something called hibernation. Frogs do hibernate. Aquatic frogs, like Ontario’s Leopard Frog, go to the bottom of oxygen-rich water bodies, where they lie on top of the mud all winter. The crucial thing is to be on top of the mud and not buried in it. Being on top of the mud lets oxygen from the surrounding water get in through their skin. The rest of their body systems slow right down, and they wait out the winter.

This slowing of body systems during hibernation is a bit like the other kinds of hibernation that we know about in mammals, such as bears, bats, and ground squirrels. But of course, frogs are amphibians, and so their hibernation is very different in some ways. Being amphibians, they are cold-blooded or ectothermic. This means they can’t control their body heat, and they have to take heat from their surroundings. Some other ectothermic animals, like snakes or crocodiles, sit still in the sun to keep warm.

Frogs are ectothermic, but they’re also poikilothermic. You aren’t. You can’t put up with much. You’re in trouble when your body gets just a few degrees too hot or cold. But the wonder of being poikilothermic, like a frog, is that you can live through huge changes in your body temperature. It’s not just that frogs can spend the winter on the bottom of an ice-covered lake, but when and where it gets really, really cold, frogs can turn into frogsicles. While aquatic frogs are camping out on the bottom of the lake all winter, terrestrial frogs further north will spend the winter under a log or some leaves. As the winter bites, the frog pumps a kind of anti-freeze through its body. Then parts of the frog literally freeze solid. Its heart stops beating, it stops breathing, and as far as we know, the brain pretty much stops working.

Even though parts of the frog will freeze solid, the anti-freeze protects the individual cells. When spring comes, the frog springs back into action, up and out of the mud.