If you have been following the world of poker over the last year, you have likely heard of various cheating allegations against top pro players. Two of those players are Jake Schindler and Ali Imsirovic. Last week, the Poker Masters began in Las Vegas, and there were questions about whether Schindler and Imsirovic would be in attendance.

That question has been officially answered as both players are indefinitely suspended from PokerGo events for the remainder of 2022. This comes after many allegations from well-known pros and suspicions of suspensions by other poker leagues.

The 2022 Poker Masters is underway at the ARIA Resort & Casino in Las Vegas, NV. Prior to the start of the series, there were some that wondered if certain well-known pros would show up to the event. Daniel Negreanu even stated on Twitter that he was betting that Ali Imsirovic and Jake Schindler would not show up to play.

We don’t know if Negreanu was prophetic or if he had inside information, but his prediction is correct. On Thursday, the PokerGo Tour announced that both Schindler and Imsirovic are suspended indefinitely. The suspension will last through at least the remainder of the 2022 Poker Go Tour season. Afterward, a review will take place to determine their eligibility.

Statement regarding the PGT status of Ali Imsirovic and Jake Schindler.

The suspension comes after a summer that was full of allegations from top pros against Imsirovic and Schindler. Alex Foxen and Chance Kornuth are among the pros that called out the pair for cheating at online poker and in live poker.

Among the allegations was that the players used Real Time Assistance software in online poker games. Also, there were allegations of chip dumping and soft playing during live poker events. Norman Chad of ESPN’s World Series of Poker broadcasts has even called for a 10-year ban for the pair and other cheaters in the game.

From the time of the initial allegations, several pros have been calling for some form of blacklist or punishment for known cheaters in the game. This is the first public admonishment of any alleged cheaters from a major poker organization.

Some of you may remember that Bryn Kenney was also named as an alleged cheater this summer. His story was among the most public after allegations of his running a “cult-like cheating scheme” by PokerNews.com.

Pro Martin Zamani made accusations earlier this year that Kenney ran a stable of online cheaters. Zamani admitted that he was part of the stable and had cheated players out of millions. The group colluded together on Partypoker and GGPoker in various satellites and online poker tournaments.

When the PokerGo Tour announcement was made this week, Kenney’s name was noticeably absent from the list of offenders. Some feel it came because Kenney has been attempting to defend his name since the allegations, whereas Schindler and Imsirovic have been silent. Schindler won his first WSOP bracelet this past summer but failed to comment on any questions regarding allegations of cheating.

Schindler and Imsirovic No Longer on PGT Leaderboard

One thing you may notice is that neither player are part of the PGT Leaderboard. Due to the suspension, neither player is eligible to win. Imsirovic easily won the PokerGo Tour Player of the Year title in 2021 after winning 14 tournaments. However, he will not take the title this year. 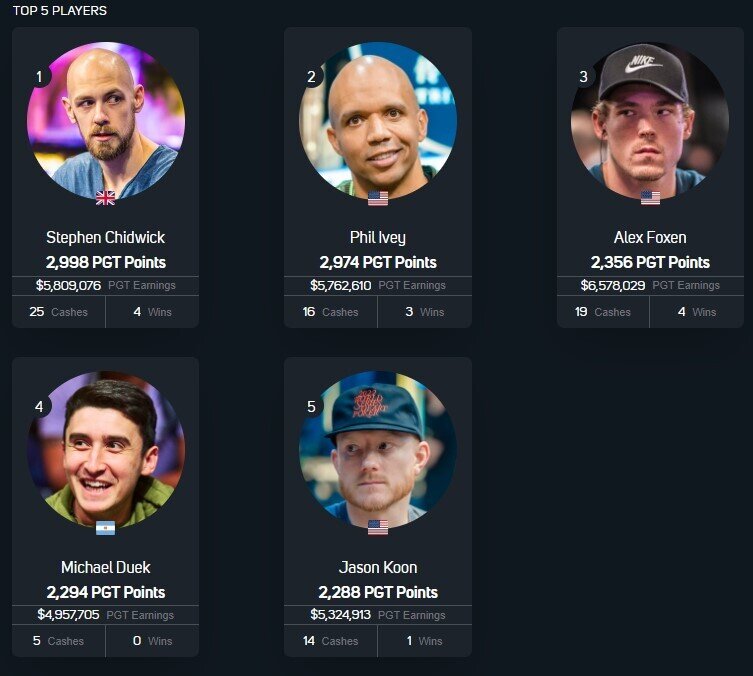 Presently, Stephen Chidwick and Phil Ivey are in a dead-heat at the top of the leaderboard. Chidwick leads Ivey by a single point. However, that will likely change drastically over the next week or so due to the Poker Masters.