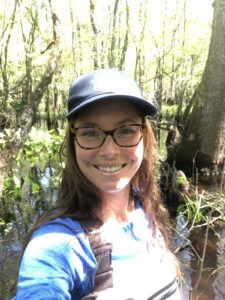 For this Swim Guide Spotlight, we reached out to Erin Donmoyer, the Black-Sampit Riverkeeper to learn more about the development of the new Riverkeeper program for the Black and Sampit watersheds. *This interview has been edited for length and clarity.

Danica: Hello Erin. I just wanted to start by congratulating you on becoming the Black-Sampit Riverkeeper!

Erin: Thank you, thank you.

Danica: To begin, could you introduce yourself and talk a little bit about how you got involved in the Waterkeeper movement and how you ended up in your current position?

Erin: Sure. It was kind of by happenstance. I was a consulting Environmental Scientist in Alaska for about 10 years and then did a brief stint as a specialty cut flower farmer and B&B owner in Vermont and then relocated back to my original home state, South Carolina, just late last year. I happen to have a friend who had worked with Waterkeeper Alliance for about eight years and he’s with the actual parent company Waterkeeper Alliance. And a job post for a Riverkeeper right in this tiny little random rural area where my family farm happens to be, that I relocated to help out with, popped up. So it just seemed serendipitous and well, I love these rivers and swamps. I grew up exploring them as a kid, especially the Black River. It just seemed like a natural progression, a natural door that had opened that I should walk through. So, here I am. Erin: Yeah, yeah, it really is!

Danica: That’s awesome. I’d love to know more about programs that you’re fledgling for the Black and Sampit Watersheds.

Erin: Sure, sure. A lot of Riverkeepers step into an already established program, I did not. There was not a Riverkeeper on either river prior to my position so I’ve just kinda spent a few months catching up on everything that’s going on with the watersheds and what is needed for a program. With my background in science, it was kind of a natural first step to say “okay, let’s work on a baseline data set for water sampling on each of the rivers”. The Black River already had a decent amount of history of water sampling in certain parts of it with volunteer programs and different conservation groups that are up river a bit from here. The Sampit River really didn’t, there was kind of a dearth of information for water quality. There are quite a few industries along that river in just the short stretch that it is. It’s no more than 10 miles but the Black River is much longer, it’s about 151 miles. Erin: So I’ve mostly just been working on getting the water sampling programs going and trying to identify volunteers that would be interested in working on it. Also identifying where litter issues are. We didn’t procure it but we kind of stepped in and aided in the install of a WATERGOAT trash system up in Kingstree on the Black River. There’s also a grant to put up 25 more in the state this year so I’m going to start working with a couple of other cities along the Black River, which tends to have a bit more of a litter issue than the Sampit River because  there are more populated areas along it, to identify some other places to put up more WATERGOATS. Or another WATERGOAT at least.

What else am I doing? Mostly, with the Sampit River, I’m really eager to dig into it and just identify the health of the river system right now. There are a few local small commercial fishing and crabbing operations that happen near the headwaters and down the river but about 6 miles up from the mouth, there is a large chemical plant. Information on the plant is kind of scant so I’m looking into permits that exist for waste water discharge or storm water discharge from each of the factories that are along the river but I haven’t found much on the chemical plant yet. Down from that, we have a large power generation station that is one of the last coal fire power generation facilities that exist, so we’re keeping an eye on that, of course. And then we have International Paper down towards the mouth, a very large paper mill. Like I said, I’m just eager to figure out what’s going on along the Sampit River.

There also seems to be what looks like to me, some salt water intrusion going on which might just be a natural element of climate change. I was up at the very tippy top headwaters today to take a PFAS sample on the Sampit River. Two, an upstream and an downstream PFAS on the Sampit River. That’s the other thing that’s happening that’s kind of exciting to check for PFAS. I took a salinity reading at about 10 miles upstream, where the water is coming out of the bog and I still got a salinity reading of about 2 parts per thousand salinity, so that is a big question mark in my mind right now. Why are we finding salt in the system near the headwaters? So, just lots of questions right now and I’m just gathering information. Particularly on the Sampit River where there is not much available.

Danica: It sounds like there is a lot you want to accomplish as the Riverkeeper.

Erin: Yeah, definitely! And the Black River has a lot of admirers and supporters already. There are a lot of conservation efforts happening on that river prior to me and it’s getting a lot of attention with the new state park that’s coming. It’s a 70 mile stretch of the river that will be South Carolina’s newest state park. There are 8 land stops along the way that are a mix of public and private ownership that will have camping sites and different sorts of facilities for people utilizing the river trail in the park. I’ve been involved in a lot of those efforts towards planning that park and Winyah’s River Alliance, the chapter of Riverkeeper that I work with, owns the anchor land point for the park system all along the river. So I’ve been working with the steering committee that makes the decisions about how and what money comes in for this park system, and how it is spent on each of the land stops. We’re building up facilities there so I’ve been trying to connect with the local community which is predominantly African American. Right along where our little park is there is a community called Choppee. So trying to figure out what they want to see and what they would use, as it’s their park historically, and it still is, so we just want to make sure what is being built there reflects their desires and their needs. So, that’s a bit of what I’m working on.

Danica: It’s really cool that you get to work directly with the community to make sure it’s a place that everyone can use and wants to be in. Danica: I’d like to maybe take a step back and ask why the Black River and the Sampit River? What is the difference between a river that has a Riverkeeper and one that doesn’t?

Erin: Well, I mean, I wasn’t so much of a part of that decision making process. (laughs)

Danica: Of course not, but what do you think the benefits are?

Erin: We have tried to cover each of the rivers that spill into Winyah Bay and these are two major rivers that weren’t currently being watched over. I think because we already had a presence here with land conversation at Rocky Point and we were having to get involved with efforts on that with the park planning. It seemed to make sense to have a broader reach for Winyah Rivers to go ahead and have a Riverkeeper. And the Sampit River, well, if you’re from around here you know the Sampit River needs a keeper. It needed somebody assigned to watch out for it, it’s kind of the ugly duckling of the rivers around here but I mean it is really beautiful. These large freshwater marshes and expanses that surround the river before you reach more Hardwood Upland forest and it’s a pretty beautiful habitat.

Danica: So what makes it the ugly duckling? (laughs)

Erin: It’s been saddled with giant factories. The county opened it up for industry long ago and I think it just “made sense” to concentrate them all in one area and it just happens to be along the Sampit River. Unfortunately.

Erin: Yeah, I don’t know. Maybe land was cheaper, it was more rural. I’m not sure historically what happened there. With most of the locals, it seems like it’s a place in their history that they remember very fondly but since the industries moved in, they don’t recreate there as much anymore. They tell stories about it historically being a really beautiful river that they loved fishing and boating on but not as much anymore. Hopefully we can take some steps to move back in that direction.

Danica: For sure, now they have a Riverkeeper! I think you answered most of my questions, you really covered a lot. The last question that we always ask everyone is: What is your watershed’s secret?

Erin: What is my watershed’s secret? There are some people here that think we might have some of the oldest Cypress trees in the nation here. Erin: There are some people that are literally hunting for a bigger and better one in the swamps. I’ve personally gone out and measured one with one of the local naturalists who is dedicated to this particular cause of the ancient cypress trees. It looks like this one is somewhere between 2000 and 3000 years old.

Erin: So it’s lived through the rich and tragic and beautiful history of the South. It’s seen it all and I think that’s a really special part about these watersheds. My watershed.

Danica: That’s incredible. Well, thank you so much for chatting with me, I was excited to talk with the new Riverkeeper.

Erin: I’m the only one in our group that keeps failing.

Danica: That’s too bad but it happens. We’re grateful to have people like you who go out and sample and get us that data so people can make informed decisions on when and where to recreate.

Erin: Absolutely, happy to do it! To learn more about Erin and the Black and Sampit Watersheds, visit their website at https://winyahrivers.org/