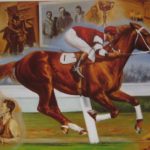 The 2022 Melbourne Cup will be run on Tuesday 1st November at Flemington racecourse with total prize money of $7,750,000.

Why is the Melbourne Cup So Popular?

Since its first running over 150 years ago, the Melbourne Cup has become one of Australia’s greatest sporting events. Referred to as the “race that stops the nation”, the Melbourne Cup It is the richest handicap horse race in the world and generates enormous interest around the Globe. The race is celebrated in Melbourne with a public holiday.

The Melbourne Cup is the best reality TV show ever invented! There is always drama and excitement with heroes created and magic moments made every year at the Melbourne Cup. Below are the best of the last twenty years.

When MAKYBE DIVA crossed the line to win her third straight Melbourne Cup in 2005, her trainer Lee Freedman summed it up best when he said “Go and find the smallest child on the racecourse because he might be the only one to see it happen again. Since that day no horse has come close to winning back-to-back Cups, let alone three in a row. The mare was a staying freak!
PRINCE OF PENZANCE came with a well-timed run to win the Cup at odds of $101 in 2015 with Michelle Payne aboard. It made headlines all around the world with Payne the first female jockey to win the race. They even made a movie about it!
VERRY ELLEEGANT came over to Australia from New Zealand with a reputation of being a handful but very talented. When she powered past her rivals to win the 2021 Melbourne Cup she recorded her 11th Group 1 win, over a distance range of 1400m to 3200m.
In the week leading up to the 2002 champion jockey, Damien Oliver lost his brother Jason in a riding accident in Perth. Despite his brother’s death, Oliver rode MEDIA PUZZLE in the Melbourne Cup and came with a barnstorming finish to win the race. It was an emotional victory with tears streaming down Oliver’s cheeks when he returned to the mounting yard.
Trainer Bart Cummings is one of the most iconic names in Australian racing and was known as the “Cups King”. VIEWED gave the trainer his last win in the Melbourne Cup as 12 Melbourne Cup winners in total. The trainer was 80 years old at the time! We will never see another Bart Cummings!

With a capacity field and so many varied form lines,  backing the winner of the Melbourne Cup is both rewarding and challenging. SPANISH MISSION finished 3rd in last year’s race and has since moved permanently to master trainer Peter Moody’s Victorian stable. He can improve with the “Moody polish” and looks at a good chance in this year’s race.