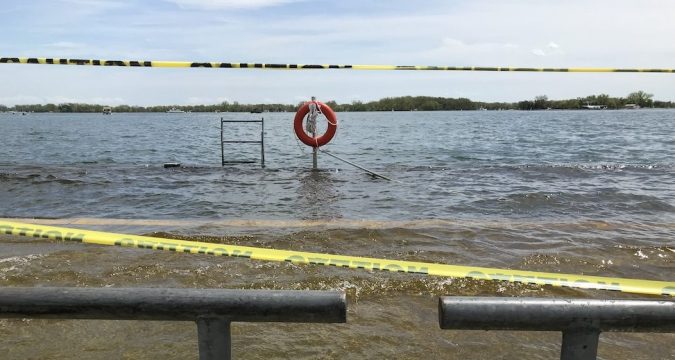 Climate change is having major consequences for our waters—that much is clear.

Not only are globally rising temperatures heating our waterbodies and causing water levels to rise, they are also affecting the water quality of our rivers, lakes, and oceans. This is dire news for all of earth’s inhabitants, since we all rely on healthy waters to survive. But it is an especially devastating fact for those of us who love our waters and regularly connect with them for our recreation, physical, and mental health.

The relationship between climate change, flooding, sewage, and water quality

You may be wondering how such a complex, global phenomenon like climate change can make the waters in the lake by your house dangerous to swim in. The truth is, if you live in a city with combined sewers, you’re one rainy day away from swimming in sewage.

Combined sewer systems (CSSs) hold both rainwater runoff and wastewater. The water is supposed to be treated at a plant, but heavy rainfall can cause the sewers to exceed their capacities. CSSs are designed to overflow under these conditions, right into nearby bodies of water. These overflows are called combined sewer overflows (CSOs), and they’re responsible for many instances of water pollution, bringing chemicals, runoff, human waste, plastics, and more into your waters. What was built into the systems as a failsafe against the odd storm has become an urgent threat to water quality as climate change continues to increase the extreme weather events and precipitation that cause CSOs.

Just to give you an idea of how often these overflows happen, Canadian cities with combined sewers dump more than 200 billion litres of untreated sewage into their waterways annually.

CSOs are one of the reasons water quality testing is so important. Sewage overflows can contain dangerous bacteria, pathogens, heavy metals, pesticides, oils, and nutrients that degrade water quality and make water recreation unsafe. Beachgoers can get very sick from recreational water illnesses.

Sewage and stormwater are one of the main culprits putting the health of beach-goers at risk of getting sick from using the water. This risk is not always communicated to the public, which is another reason that assessing and sharing water quality data is so vital.

Swimming in polluted water can cause a number of illnesses and infections. Diarrhea and vomiting are the most common outcomes. Also possible are skin rashes, eye and ear infections, and respiratory problems. A Closer Look: Flooding, sewage, and water quality on the Toronto Islands

In 2017, record-breaking water levels of 75.88 meters were recorded in Lake Ontario. In 2019, that record was broken when water levels reached 75.92 meters. Both times, the Toronto Islands flooded, affecting residents and tourists while also eroding land and damaging infrastructure. The financial and personal costs of the flooding were great, as were the environmental costs.

The Ward’s Island team from the Toronto Monitoring hub has been sampling water at Snake Island, Algonquin Bridge, and Ward’s Island and sharing the data on Swim Guide since 2017. They measure the amount of E. coli in the water, since E. coli is an indicator that waterborne diseases may be present. In the spring and summer of 2019, sewage debris was documented near Snake Island and the Wards Island Dock beach. Ward’s Island also experienced high levels of E. coli after extreme weather events in 2018 and 2019 and after extreme rainfall events in 2019.

There are no combined sewers on the Toronto Islands, which means that the most logical conclusion is that this debris and sewage is making its way to the islands from the Toronto Harbour.

Collecting bacteria samples and observing differences in water levels, erosion, and wildlife in the field helps us understand how climate change is shaping our waters. Simply put, a failed water quality test tells us that climate change and pollution are affecting a shoreline, and that we must take action to restore and protect our natural world.

Without swimmable waters, we lose touch with them, and with the issues facing them. People who spend time in the water are the eyes and ears for their community. They are able to notice threats and changes to the water’s well-being. Moreover, waters that are swimmable for people are also often healthy enough to support life of all kinds.

Learn more about why healthy people and healthy ecosystems go hand in hand.